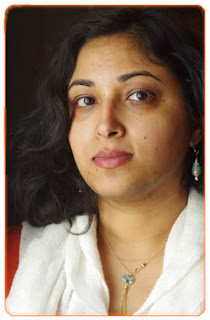 Gaiutra will have a reading by a professional actor of "Into Dark Waters," the fourth chapter of her book Coolie Woman on October 10, 2013 at 7:30pm as part of the NJ Literary Artists Fellowship Showcase.

1. You are an award-winning journalist and book critic. What made you decide to become a prose writer?


I don't think I ever made a conscious decision to write. There was, instead, a subconscious need to write. I think this had everything to do with being an immigrant child. At six, I left a village on the outskirts of sugar cane fields in South America for a working-class, multi-ethnic city on the margins of Manhattan. I wrote to describe our new landscapes. I wrote to pin down the vivid but fading memories of the place we had left behind. I wrote to understand the changes we were undergoing as an immigrant family. Writing things down was the way I tried to bring order out of the chaos of migration.

I did, however, consciously decide to become a newspaper reporter. At the time, I chose it because it seemed like a way to earn a living by doing what had already become second skin: the habit of observing and describing, from the outside. I was outside mainstream American society, and I was also outside my own community in many senses. I didn't fully fit in either place. Looking back on that now, I do think it's unfortunate that I chose journalism almost as an expression of my own alienation. Some fifteen years into my career, I view journalists not so much as professional spectators, with a vocation of being on the outside of everything, but as people who bring their full humanity to bear to tell stories, both their own and those of others, from the inside of their empathy, their skepticism, their access to power and their obligation to those without power.

2. What was your favorite thing about being a daily newspaper staff writer?

The permission it gave me to walk up to complete strangers and ask them about their lives. Struggling, at the keyboard, after all the phone calls and interviews, to come up with that one perfect image that would capture and convey a story's essence and then, sometimes, finding it.

3. You were born in Guyana, and immigrated to the United States at the age of six. What do you remember of Guyana and the journey to America?

I remember architecture and landscapes: the wooden houses built on stilts, because the Guyanese coast is below sea level; the Hindu temple in the front yard of the house we lived in with my extended family; a broken-down blue car laid to rest in that yard, pieces of which I continued to find on subsequent trips back to Guyana for three decades; the flower garden in which my cousin and I pretended to be brides.

Our journey to the U.S. was a long one because our village was remote. We had to cross a river with no bridge across it to get to Georgetown, the capital of Guyana. The ferry ride itself was an odyssey. And when we got to the capital, we spent the night with my father's cousin to catch the early morning flight to New York. I remember two things from that night: my father's relatives gave me a can of V8 tomato juice to drink, and they gave me a comic book based on the movie Grease to flip through. Olivia Newton John and John Travolta were my prelude to America in 1981.

My first American memory is of driving with my uncle from JFK to Jersey City, where we would live. I remember, distinctly, seeing the gray towers of the Jersey City Medical Center on that first drive. They made an impression, because everything else in town was squat, and because I had never lived near anything quite so tall. I'm not sure why I remember them and not, say, the Twin Towers or any other Manhattan skyscraper. But it's fitting, since it was the Medical Center that hired our relatives during a nursing shortage in the 1970s, setting into motion the chain of sponsorship that ultimately brought us to America.

4. You wrote a children’s book called “Family Ties” about the homeland journeys of President Obama and the writer Amy Tan.  What was the impetus for this book?

Very coincidentally, this project came to me through Marina Budhos, another winner of the NJSCA Literary Fellowship this year. (Also very coincidentally, Marina's late father emigrated from Guyana about three decades before my family did, and she and I have both been working on telling the stories of indentured women. Her project is a fictional imagining of that journey; mine is a nonfictional imagining.) Marina very kindly recommended me to an editor at Scholastic for "Family Ties." It's part of the publisher's "On the Record" nonfiction series for middle-school children, and the editor was looking for journalists in particular as writers. It was a small project, about 10,000 words, that I did on the side while "Coolie Woman," my true first book, was on the market with an agent. I didn't propose the theme or the subjects to profile for "Family Ties," but executed Scholastic's vision for the book. Since coincidence is such a powerful part of how all this came together... Scholastic was interested in focusing on homeland journeys for one of the books, and I just happened to have been on journeys to at least two homelands: India and Guyana. It was fortuitous, and the money from that project allowed me to finish "Coolie Woman."