New Jersey’s own Kavita Oza has advanced to the Poetry Out Loud National Finals! 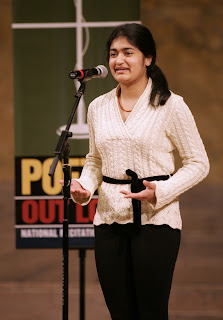 53 State Poetry Out Loud Champions gathered today for the three semi-finals competitions at The George Washington University’s Lisner Auditorium in Washington, DC. These 53 champions advanced from a field of 375,000 students from more than 2,000 schools nationwide, and tomorrow night the top nine (three from each region) will compete for the title of National Champion. Kavita competed this morning in the Region 1 semi-finals against 17 other state champions and secured her spot in the Finals when she emerged as among the top three in the region!


Playwrights Theatre and Dreamcatcher Repertory Theatre are pleased to present Shakespeare in Vegas by Suzanne Bradbeer. The co-production will preview on April 4, 2013 and run through April 21, 2013.
This comedy follows Tony, the producer, and Margot, the displaced classical actress, to Las Vegas, where they recruit the cast for a season of Shakespeare’s plays. Pickings prove to be slim, as roles go to showgirls and other locals with questionable credentials.  Along the way, a generations-old family curse threatens to bring their dream to an untimely end.
For more information, visit our website.
1) We did a reading of “Shakespeare in Vegas” in December of 2011 as part of our FORUM roundtable reading series. Based on that reading and the discussion that followed, what, if anything changed in the script?
By the time of the FORUM roundtable, I think I had learned almost everything I could from readings of the script.  It was time to see the play on its feet.  I’m grateful that John [Pietrowski] and Laura [Ekstrand] thought so too.  In rehearsals, play revisions were focused on the climactic scene and although we had a limited rehearsal period, John was able to carve out time for us to focus on that scene, which was very useful (and great fun).

2) You have a series of children’s books that are currently be used to facilitate a Head Start teaching program through Penn State. Can you tell us about your books and how this program came to be?
Dr. Carol Hammer, who ran that program, commissioned me to write a series of eight books about a young girl who goes to visit her family in Puerto Rico.  In the series, Rosa discovers in a very personal way, the charms and surprises of the country of her heritage. The series was part of a book-reading program promoting child literacy and language development.

3) What new projects are you working on?
I’m currently working on a play called “The God Game”, which goes into co-production in early ’14 at Gulfshore Playhouse in Naples, Florida and Capital Rep in Albany.  The play, while very funny, is a drama about the intersection of religion and politics, and takes place over the summer weekend when Tom, a rising political star, is asked to be his party’s nominee for vice-president. The dilemma: Tom is a fierce advocate for the separation of church and state, yet the campaign has asked him to sound ‘more Christian’ in his speeches and public statements.

4) You had the opportunity to work with Arthur Miller and Jim Houghton as the dramaturg on Miller’s “The American Clock” at Signature Theater. What did you learn from this experience?
I learned that Jim Houghton is not only a great producer, he is also a wonderful director.  I learned that even an icon like Arthur Miller would express vulnerability about whether audiences were responding to his work.  I spoke to Miller after an early preview – he was still making a few changes to the script – and he asked me how the audience was responding to the play – did they like it?  I was very moved that a man with a career like his: writer of some of the greatest plays of the 20th century, Pulitzer Prize, Tony winner, produced all over the world (etc, etc), still cared very much whether the audience in an 160 seat Off-Broadway theater, was ‘getting’ his play.

5) Do you have a favorite spring time activity or flower?
I live about ten minutes from Central Park and one of my favorite things is to walk there in the early days of spring, when you can see the changes to the flora happening on a daily basis. 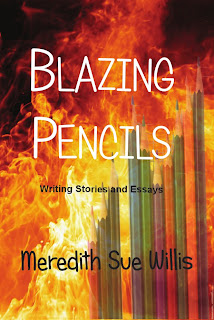 Be sure to check out BLAZING PENCILS: WRITING STORIES AND ESSAYS by Playwrights Theatre teaching artist, Meredith Sue Willis.

Montemayor Press is proud to present the revised edition of this book which The Kliatt Young Adult Book Guide called it “a fine balance between text, exercises, and examples,” and Wisconsin Bookwatch said, “Blazing Pencils is a wonderfully clear “how-to” guide to writing fiction and essays. The more than 150 writing ideas in Blazing Pencils will help the aspiring writer every step of the way in writing a complete story or essay.”  Merlyn’s Pen recommended it to “teachers who write, writers who teach, and the students who keep all the others honest.”

Meredith Sue Willis is a gifted and widely published writer of both fiction and nonfiction.  In addition to her many fine novels and collections of stories, she has also published three other  widely praised books about the writing process: Ten Strategies to Write Your Novel,  Personal Fiction Writing, and Deep Revision.
Visit Meredith's website for more information.
Posted by Playwrights Theatre No comments: