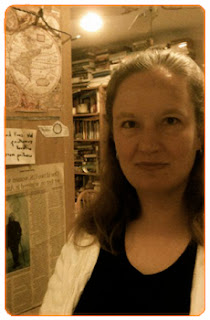 EM's play Magellanica: A New and Accurate Map of the World will have a reading on October 17, 2013 at 7:30pm as part of the NJ Literary Artists Fellowship Showcase.

1. You are from Oregon, lived in LA for a few years and then Princeton, NJ. Do you find that where you live has an influence on your writing?

Absolutely.  Both where I live and where I'm from.  Growing up in rural Oregon, on a small farm, was a huge influence.  I spent a lot of time climbing trees and picking berries and wading in the creek.  We worked hard, and we didn't have a lot of money, but we read a lot.  During the summers, I'd check out stacks of books from the library in town.  I had a lot of time to read (and be read to by my folks), a lot of time to be close to nature, and a lot of time to make up stories in my head to entertain myself while I was working...  which may have been the beginnings of me being a writer.

When I lived in California, I actually lived most of the time in Venice and Santa Monica -- which are both beach communities.  I was living in a huge, sprawling city, and spent a heck of a lot of time on the freeways, between my day job commute and my theater work.  But I was able to walk (or rollerblade!) by the ocean whenever I wanted to, which made all that traffic and cement bearable.  At the same time, I had the joyful discovery of community, and the vibrancy and diversity of city life, when I was in Los Angeles.  There was a theater community for me to find and join, which was big enough to have room for all sorts of theater-makers.  That's where I became a playwright.  (No, not a screenwriter or television writer, odd duck that I am.)  I met (and worked with) people from all over the world.  I went to graduate school, and became more well-read and broader in thought from that experience.  I saw a ton of theater -- which hadn't been possible where I was from.  The only plays I saw growing up were the ones my brother and I were in, in elementary school and high school.

Living in Princeton was a gift.  I love that it's a university town, that it has its own wonderful symphony orchestra, that the Institute for Advance Science and Albert Einstein's old house are there, and that you can walk from your doorstep right into the woods, if you're so inclined. Which I often was.  I find that as a playwright, I need to have a lot of time to be quiet, and listen to what my characters are trying to tell me.  But I also want to be able to hear music and attend theater and go to talks and visit museums with some regularity.  Princeton was perfect for that. A lot of it was available right there in town, but I was just a train ride away from New York City or Philadelphia if I wanted the city experience -- like a show at BAM or off-Broadway and pork bau, five for a dollar...

2. Most of the characters in "Magellanica" are scientists, and your play "Song of Extinction" had a lot of science in it, too.  Where does that come from?

I loved the book part of science in high school and college, but loathed the laboratory part.  I never quite understood what we were supposed to be doing in the lab, and was always afraid that we were going to set ourselves on fire while we were doing it.  Luckily, I had good handwriting, so I mostly wrote up the lab reports while my lab partner tended our bunsen burner. As an adult, I have returned to science -- the book part of science, reading about scientific discoveries and the people who are making them.  Like artists and writers, scientists are asking the big questions about what the world is all about, and what our place is in its beautiful complexity.

3. In your research, you mentioned you were reading a lot about maps to understand what one of your characters (a cartographer) is trying to tell you. What are the maps revealing to you?

The full title of my play is "Magellanica: A New and Accurate Map of the World."  I found both parts of the title on a collection of antique maps.  "Magellanica" was the name given to basically the whole southern hemisphere, which Magellan was the first to circumnavigate.  The phrase "a new and accurate map of the world" was written at the top, by the cartographer.  I looked at the map, which didn't have Antarctica on it at all (because it hadn't been discovered yet), and had sea monsters drawn into certain oceans, and had many things in different places than they actually are.  And it occurred to me that we are always feeling like we are drawing the new and accurate map of the world, and yet there are always things we don't know about our world that we're leaving out.

Magellanica is set at the South Pole -- one of the last places on earth to be explored.  I've been reading some of the amazing stories of the early Antarctic explorers like Scott and Amundsen and Byrd and Shackleton.  This has also gotten me looking at maps -- of the Antarctic terrain as it was then (and now), and their paths to the South Pole.  I'm amazed at their heroism, and at the bravery of the scientists, engineers, and other modern explorers who work at the South Pole today.  It is still a remote and extreme environment, colder and darker and farther away than most of us can imagine.


4. We asked you for a list of books that have inspired or influence you. You mentioned Hamlet by William Shakespeare. What is it about this play that has had an impact on you?

Hamlet is a guy with a lot of questions.  He is trying to figure out what the truth is, and what he should do about it.  Then he acts.  His quest for truth and justice is honorable and heroic.  I can empathize with his confusion, though, as he wrestles with the information he's given, and whether it can possibly be right.  The play seems very modern.  Also... it's a story I get more from every time I read (or see) it.  It keeps on giving.  And some of the passages in it are astoundingly beautiful.


5. If you were given the choice of a trip around the world or a trip to outer space, which would you take and why?

Around the world.  Because as fascinating as I find the universe at large, it is finally the human heart I'm most interested in exploring.  And I love meeting people, in all their marvelous, frustrating, fascinating diversity.  And we have such a beautiful world, and I've seen so little of it!