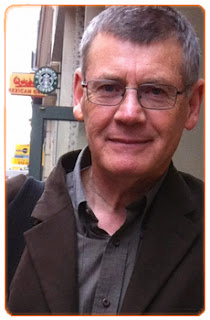 Peter will read poems from his new manuscript, Anonymous Fever, including several in the voice of "John Doe," a man lost in time and space, disconnected from others and increasingly, from himself. Audiences at previous readings have told Peter they were grateful for his suggestion that they might want to hang on to their chairs. The reading will be held on October 18, 2013 at 7:30pm as part of the NJ Literary Artists Fellowship Showcase.

The reading will take place at The Long Beach Island Foundation of the Arts and Sciences
120 Long Beach Blvd.
Loveladies, NJ 08008
Click here for directions

1. You were born in Wales and grew up in New York City. Does this make you an aggressive, yet, polite poet?

I'm not usually a rude guy and don't believe in shocking an audience for the sake of shock, but polite is too "polite" a word. I like to create images that will startle a reader into a kind of slanted consciousness where familiar things appear slightly off. For example, I have a line in a poem that refers, not to restless leg syndrome, but to a more common disease, "restless prick syndrome." (Okay, bleep the previous sentences if you must.)

A student in an alternative school in Cape May told me. "Man, you wear a suit jacket, but your poems, it's like they're wearing a leather jacket."

In terms of my origins, I have written a lot about New York, and in recent years, I am writing more and more about Wales, but I am actually a New Jersey Poet. I have lived in the Atlantic City area most of my life, and my literary mentors are Walt Whitman, William Carlos Williams, Allen Ginsberg, and alas, Stephen Dunn.

2. You direct the annual Winter Poetry & Prose Getaway. What do you hope writers will take away from these getaways?

When I was teaching full time at Atlantic City High School I never had enough time to write. I tried what the experts suggested and wrote with my students, but I was writing for fourteen year olds, not my ideal audience. I tried waking up an hour earlier to write, but I was already getting up at 5:20, so I just fell asleep at the keyboard. In the late 80's and 90's I was fortunate to be invited to Yaddo and two other artist colonies. The conditions were so good, I couldn't bear to write the rest of the year. "Murphy, you phony," I said to myself, "how can you call yourself a writer if you only write one month a year?" So I decided to rent a hotel room one weekend a month creating a mini artist colony, and it worked. Most of the poems I have written in the last twenty-five years were composed in a Marriott Courtyard, a Holiday Inn Express or a Hilton Garden Inn. Other writers asked me "How do you find time to write?" When I told them I hole up in a hotel, I kept hearing, "I wish I could go with you." In 1994 I invited a dozen other writers to join me at a hotel in Cape May, and that began the Winter Poetry & Prose Getaway. We offer writers challenging workshops, time to write and supportive criticism. Now in its 21st year the Getaway attracts over 200 poets, fiction and nonfiction writers from all over the country. In 2012 we partnered with Richard Stockton College and moved to the Seaview Hotel in Galloway. Our participants leave the Getaway having written more and better then they thought possible in one weekend.

We also offer other writing getaways around New Jersey, New England and in the UK. We wrote in Scotland last summer, and we will be writing in Wales next July to commemorate the 100th anniversary of Dylan Thomas's birth.


3. You’ve operated heavy equipment, managed a night club and driven a cab. How have these jobs influenced your writing?

Because I was drunk for much of my adolescence I flunked out of three colleges in three semesters. I figured I was stupid, so I took whatever work I could get. I have written about working construction and working at a bar, but the best thing these jobs did for me was make me realize that I did not want to do them for the rest of my life. After sobering up at the ripe old age of twenty-one, I  thought maybe I'm not so stupid and tried a few more colleges until, thank God, I finally graduated.


4. You have been an educational advisor to a number of PBS television series on poetry. How do you help them translate written word for a visual medium?

I wish I could take credit for that, but mostly I helped write teacher guides suggesting how to use the television programs to support teaching poetry. The last one I wrote was for Bill Moyer's Fooling with Word which is still online.


5. We’re curious…the picture you sent us had Qdoba Mexican Grill and Starbucks in the background. Was this a subtle hint where we could take you for lunch?

You have better eyes than I do. I see the Starbucks sign, but I can't read the other one. I'm not fond of Mexican food, but I love coffee. That said, I'll be happy with a bottle of water during my reading.

To learn more about Peter, by visiting our website