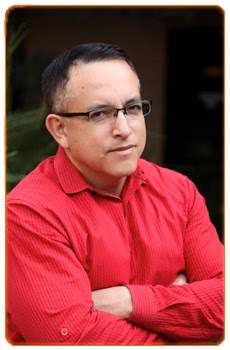 The 5th reading in our FORUM "Soundings" series is DUDES AND BROS by Guillermo Reyes. This reading will be begin at 7:00pm on January 16, 2015 and will be held at Fairleigh Dickinson University, Dreyfuss Theatre, 285 Madison Avenue, Madison, NJ. Click here for directions. Click here for a printable map of the campus (the Dreyfuss Theatre is located in Building 9).

Mike’s bride has left him hanging at the altar, and now his best friends try to console him during a night of drunken and hilarious revelations at an Atlantic City Hotel. Speaking in explicit language that‘s not for the faint-hearted, these dudes find the strength to get Mike’s groove back with plenty of booze, trash talk, and a surprising bout of occasionally genuine emotion beneath their macho bravado.

GUILLERMO REYES has produced and published a variety of plays including the comedies, Men on the Verge of a His-Panic Breakdown and Mother Lolita as off-Broadway productions with Urban Stages, Chilean Holiday and Saints at the Rave at the Humana Festival at Actors Theatre of Louisville, the historical drama, Madison, at Premiere Stages, winner of the New Play Award 2008, among other plays.  Miss Consuelo and Sunrise at Monticello were previously developed with and produced at Playwrights Theater of New Jersey. In 2010, he published a memoir with the University of Wisconsin Press, entitled Madre and I:  A Memoir of our Immigrant Lives, chronicling his immigration from Chile and growing up in the D.C. area and in Hollywood, CA.  He’s a professor at Arizona State University in the School of Film, Dance and Theater. Recently, in 2013, his play, Deporting the Divas was published in a new Cambria Series anthology, Gay Drama Now edited by John Clum, and another play, We Lost it at the Movies, was published by the Bilingual Review Press in the anthology, Vaqueeros, Calacas and Hollywood.  In 2014, his sketch comedy play, The Hispanick Zone, was also published by L&S Books and is available on Amazon.com.


1) Where did you get the idea for DUDES AND BROS?
I teach among students who are young college undergraduates and they tell me plenty so I didn't have a problem imagining an all-night revelry like Dudes and Bros.  I directed an earlier version of the script for the Phoenix Fringe Festival and all of my actors were in their early 20s with experiences that shone a light on the various issues of the play including its rambunctiousness.  I did read some books, Guyland by Michael Kimmel, a sociological study about how young American men have extended their adolescence way into their 20s and beyond.  I Hope They Serve Beer in Hell by Tucker Max is a series of humorous essays delving into the same heavy drinking and sexual misadventure lifestyle.  But some of the particulars were suggested by a couple of my students, one of them a New York-born student at ASU who basically has led this life and whose three roommates and he lived in a house near the university whose parties were apparently infamous.  When we did the play at the Fringe, two of those roommates ended up in the play as actors basically reliving some of their nights.  Yet a third roommate saw all the performances of the play and then took my Comedy Writing class at ASU and told me that I must have spied on their lives because everything in the play is something they lived in some way or other.  I thought that was the best comment I've ever heard.  I didn't have to spy on anybody, but I did bring everything I'd heard into one place at one time. As for the plot twist at the end, which I won't give away here, it was suggested by Arnold Schwarznegger, the former governor of California, whose own partying with his maid inspired me to, let's say, allow for a particular character development.  I thank the Terminator for the righteous ending.

2) In 2010, you published a memoir with the University of Wisconsin Press, entitled Madre and I:  A Memoir of our Immigrant Lives, chronicling your immigration from Chile and growing up in the D.C. area and in Hollywood, CA.  Those are very different locations to grow up in. What kind of impact has that had on your writing?
It just means that I adopt quickly to my environment, try to get the language down first, then the history, and then the cultural ambience of a place.  So yes, Chile has shown up in some of my plays, particularly in A Southern Christmas, a growing up story naturally, which PTNJ produced back in 1999, and Hollywood lore is all over the place in my other plays, and DC and politics and American history has ended up as well in some of my plays, especially in Sunrise at Monticello which PTNJ produced in 2005, and PTNJ also did a reading of my play about the fourth president, Madison.  It means that my mind enjoys extracting stories out of the various environments I've lived in and experienced.  Arizona is showing up in my writing more often nowadays for obvious reasons, but I'm not entirely done with my other environments.  My exposure to New Jersey has been obvious from my past work there with PTNJ but also because some of my students have come from there, and the Italian-American ambience is also something I've absorbed from living in Italy for a year and a half and I like the cultural impact of Italian culture on the U.S. particularly through its immigrant communities.  Italian-American characters have shown up recently in my writing, and my play Mother Lolita produced by Urban Stages in New York features a Chilean mother of Italian descent, so the various cultural heritages that crossed my path from Latin America to the U.S. and Europe have become part of my imagination in various different ways.

3) You are a professor at Arizona State University in the School of Film, Dance and Theater. What is the one thing you hope your students take away from your class?
I teach playwriting courses but I have also started some genre courses at ASU.  This semester I'm teaching Introduction to Comedy Writing and Writing the Crime Drama, different classes with a variety of issues.  In Comedy, I try to get students to think about the "mess" comedy makes and not to be afraid of thinking up wild scenarios that end up in a trashed-up place.  If Lucy goes to the chocolate factory, she has to get her mouth full of them and if she goes to an Italian vineyard, she has to get herself in a huge vat and have a fight with an old lady who works smashing grapes with her feet.  Flannery O'Connor, who had a dark sense of humor, commented once in one of her essays that some writers she taught were afraid to get their hands dirty, that fiction was just too lowly for them.  Same goes for comedy.  If you're afraid of the lowliness of messy hands or stuffed mouths and hanging by a cliff or tripping over furniture and other indignities, let alone a pie in the face, comedy is not for you.  I try in every class to come up with some sort of "essence."  In Crime Drama, the dirty business is obviously violence, particularly murder, another type of indignity, and it requires greater research into forensics and investigative practices as well as the responsibility we all have towards a portrayal of criminality, or crime and punishment.  It's messy, and bloody, and yet it requires ethics as well.  It's more serious business, but it has its own fascination, and it uses another side of the brain than comedy.

4) Which is more challenging: writing a memoir from actual events or creating a new play from scratch?
It's all hard work.  I don't think one is less challenging than the other.  The memoir obviously needs to capture the essence of a time past, and the writer has to be conscious of reporting honestly from memory, but memory can be illusive as well.  Thus far, none of my family members (except one who lives in Long Island) have read the memoir because they can't read English, so I have no idea if I got something terribly wrong.  I'd prefer for the memoir not to be translated into Spanish at this time---how convenient!  A new play is never entirely from scratch either since you end up using some aspect of a true experience, even if it's re-imagining somebody else's experience.  They're both hard work, and rewriting is required in anything you write.

5) Do you have a bucket list? Is so, what is the third thing on your list? If you don’t have a bucket list, what is one wild and crazy thing your hope to accomplish in your life?
A bucket list?  I don't know if I've ever put it that way.  I want to adapt one of my plays or short stories into a movie, and direct it myself.  I just need somebody to give me a million or more dollars.  Maybe I need to rethink the whole thing as a "Blair Witch"-style project which can be done with a single camera or something.  That's it, that's probably the one thing that is waiting out there for me, to take a next leap into film which I do admire as an art form.   It's just expensive.