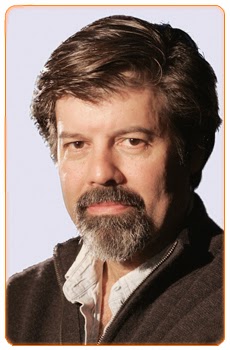 The 7th reading in our FORUM "Soundings" series is HAPPY YET?? by Joe Sutton. This reading will be begin at 7:00pm on January 18, 2015 and will be held at Fairleigh Dickinson University, Dreyfuss Theatre, 285 Madison Avenue, Madison, NJ. Click here for directions. Click here for a printable map of the campus (the Dreyfuss Theatre is located in Building 9).

Benny, a twenty-something slacker Jersey-Boy suddenly finds himself agreeing to be the mayor of New Corners, New Hampshire. Not knowing exactly what to do, he decides he is going to focus his administration on “The Pursuit of Happiness.” His journey brings him across some colorful and unusual characters, both real and imagined, as he bumbles his way towards his goal.

Joe Sutton’s plays include Voir Dire (nominated for the Pulitzer Prize and the Best Play Award of the American Theatre Critics Association), As It is in Heaven, The Winner,The Third Army, and Restoring the Sun. Joe co-wrote The Predator’s Ball with Karole Armitage, and saw the piece premiere in Florence, Italy before enjoying a run at the Brooklyn Academy of Music.  Other theatres producing Joe’s plays include New York Theater Workshop, Long Wharf, Arena Stage, the Cleveland Play House, and the Old Globe in San Diego.  After Hurricane Katrina, Joe initiated The Breach, a New Orleans-centered theatre piece co-written with Catherine Filloux and Tarell Alvin McCraney which premiered at New Orleans’ Southern Rep before going on to play at Seattle Rep.  More recently, Joe’s play Complicit opened at London’s Old Vic with Artistic Director Kevin Spacey directing. Joe has also recently been developing a pilot of USA television called Scales of Justice, about an overweight detective in post-Katrina New Orleans. Joe is a recipient of numerous awards and honors, among them fellowships from NYFA, the NEA, and NJ Arts.  When not in rehearsal, Joe teaches playwriting at Dartmouth College.  There he lives with his wife Anne and their son Nicholas.


1) Where did you get the idea for HAPPY YET?? It actually started when I read David Henry Hwang's YELLOWFACE.  I thought there were strong elements, but more generally I started thinking about satire in general -- and the relative absense of satire in contemporary theatre.  We have it on television -- Jon Stewart, Colbert...but very little in theatre.  I'm sure it's more prevalent than I think...but when I started casting about for models, I came up with very few.  BLOODY, BLOODY ANDREW JACKSON,   6 DEGREES OF SEPARATION.   Not that much.  And so first things first, I simply wanted to write an American satire.  And that got me thinking...well, now...what do I want to satirize?  The answer that came to me -- my current home, New Hampshire.  And more to the point, the political reality and myth of New Hampshire.  And that has everything to do with (1) OUR TOWN, Wilder's idealized "Grovers Corners, New Hampshire", (2) "Live Free or Die", the notorious motto of the state that people around the country find so amusing every time there's a presidential primary up here, (3) the very existence and nature of New England "town hall" meetings, as the essence of American democracy.  So all this became the subject matter, and I had to come up with a "take", a perspective.  And somewhere along the line I started wondering about "the pursuit of happiness".  What a bizarre notion, I thought, to place at the heart of a governing philosophy.  Civilizations have been founded upon "king and country", the propagation of certain religious doctrines and power, the very spread of civilisation against the darkness of lawlessness and paganism (not that that's such a bad thing)...but "the pursuit of happiness"???  Really???  To found a country upon???  What's up with that???

3) Your character, Benny, decides to focus his administration on “The Pursuit of Happiness.” What makes you happy? So the personal...what makes me happy?  The first thing that comes to mind is -- nothing.  I'm a curmudgeon.  Actually, I think it's true of many comic writers/satirists...not much actually does make them happy.  And so the satire is a desperate attempt to provide the writer with a source of pleasure/enjoyment in a world devoid of it.  But I think that overstates.  My sons make me happy.  My wife.  My work.  And I tend to obsess about my favorite football team, the NY Giants.  When they're winning, that makes me happy.

4) Why did you decide to become a playwright?
I couldn't help it.  And that's what I tell all my playwriting students.  If you can do anything ELSE...do it.  Only be a playwright if you simply can't help yourself.

5) What is the last play that you saw and what did you enjoy most about it? I'm forgetting.  Last one I loved -- BETWEEN RIVERSIDE AND CRAZY.  I think Stephen Adly Guirgis is the Eugene O'Neill of our era.  He writes about the down and out, the "underclass", with enormous empathy and authenticity.  It just feels real.  And more than that, illuminating.  A hundred years ago, pre-O'Neill, there was Gorky with "Lower Depths".  And he showed a newly minted Muscovite middle class the despair that existed all around them.  And it seared.  I think that's what Guirgis (with an enormous dollop of humor)...does for us.