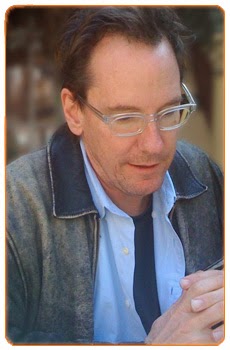 The 9th reading in our FORUM "Soundings" series is ECSTASY by Ken Scarborough. This reading will be begin at 7:00pm on January 21, 2015 and will be held at Fairleigh Dickinson University, Dreyfuss Theatre, 285 Madison Avenue, Madison, NJ. Click here for directions. Click here for a printable map of the campus (the Dreyfuss Theatre is located in Building 9).

Having just started a new job as a stagehand at a theater run by a friend, Jeremy is convinced that so few people are left who can truly appreciate the beauty of classical music.  Then his slacker cousin shows up and everything he thought he knew starts to change.

Ken Scarborough has four Emmys for his television writing: as a staff writer for Saturday Night Live, and for his work as a head writer on various childrens’ television series. Long before that, he worked as a stagehand.

1) ECSTASY’s main character, Jeremy, is a stagehand. You used to work as a stagehand. How much of your real life experiences are in this script?
I was a slightly more competent stagehand than Jeremy, but mostly because I lack his grand ideals. (I think Jeremy would be deeply unimpressed with my work.  He'd doubtless consider any effort spent in trying to put on a good show a particularly cringeworthy form of toadying.

2) As a staff writer for SATURDAY NIGHT LIVE, where did you get your ideas for each week’s show? Do you start with a skit and fit it around the guest host or do you write to fit the guest host?
I came up with all my best ideas the week after the show aired.  (There’s a really funny SNL in my head.)  The production itself was the most fascinating part of the experience  —  the closest I’ve come to doing live theater on a weekly basis.

3) You've won four Emmys for your television writing. What is the moment like after you hear your name called?
I briefly gain superpowers which I try to use for the good of mankind.  (Emmy voters take note!  Thx!)

4) You've also written for several children’s television shows such as ARTHUR, MARTHA SPEAKS and DOUG. Do you use a similar process whether your are writing for a young audience or an adult audience or do you approach them in a vastly different way? For the most part I write like an adult when I’m writing for children and like a child when writing for adults.
I guess in practice that means that I do try to take kids' concerns as seriously as I’d hope to have them taken if I were a kid. In both cases I try to write things that would entertain me—so even if everyone else is suffering, I’m having a great time! Whoo-hoo!

5) If someone was to write a television version of your life story, who would you want that to be and why?
Me or Shakespeare.  (Probably Shakespeare —it might sound conceited if I wrote about myself.

Click here to reserve your seat to see ECSTASY.